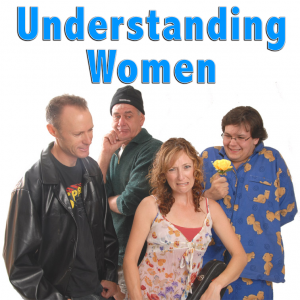 Mike, Dave and Julian spend a weekend in a garden shed determined to break an age-old mystery.

Armed with a case of beer, a box of girlie magazines and a holy book they are going to "understand women".

What they discover is not quite what they expected. Understanding Women is a comedy play for both sexes!

Dave: Mid forties to mid fifties, married for 20 - 25 years, two teenage or adult kids. Dave is very practical and down to earth; He is dressed rougher, is unshaven and has a roughness about his manner.

Mike: Late thirties to mid forties. Could be same age or younger than Dave but any age difference has no manifestation in their friendship, he has a problem with committing himself to relationships. A schoolteacher, Mike uses his knowledge of things to put himself above others. He is clean, well dressed, turns on the charm for the ladies but is coarse around the men.

Julian: Younger than Dave, possible to be as young as late twenties but could be as old as Mike, hasn’t had a relationship since primary school. Clerical / administrative career, is good with ideas but useless with their application. He is dressed a little out of fashion, but not a geek or a nerd to look at. He can tend to be clumsy and uncomfortable under pressure.