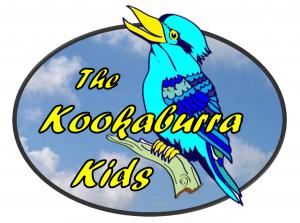 Students at an Australian holiday camp discover that the local Mayor plans to close the camp and redevelop the site.

With local residents they use social media combined with the old fashioned bush telegraph to contact past generations of campers to help them thwart the Mayor’s plans and save the camp.

It has well known Australian songs including Kookaburra sits in the Old Gumtree, Waltzing Matilda and I am Australian with music arranged especially for young voices.

Camp Kookaburra, is located at a fictitious place somewhere in the Australian bush.

of young people from all over Australia for at least three generations.

Some of the campers are enthusiastic and excited about the camp. Some are not happy

campers. But “Camp Kookaburra” has become a family tradition. Here the students learn to

cope with living in a rural setting with no mobile phone coverage, no television, no wireless

internet. Making new friends and finding interesting ways to entertain themselves is a

While they are at the camp, the students, through their association with a local farm boy,

named Nick, discover that the local Council, headed by the Mayor, intend to close the

camp, pull down all the old buildings and redevelop the site for something more profitable.

plans and save Camp Kookaburra.

“Granite Gully” is a heavily timbered, steep rocky gully nearby. The students are forbidden

to go there, because it is a very dangerous place. A small group of the younger students,

disobey instructions and venture deep into the gully and become lost. While they are

missing the camp leaders fear for their safety and a search is organised. Eventually they

are found safe and sound, but during their escapade they have accidentally discovered

something very important about Granite Gully. The secret they have discovered in “Granite

Gully” may hold the key to their rescue plan.

locals combine to contact many generations of past campers to save Camp Kookaburra,

Adrian. Serious Student. Studious type. (Could be a boy if needed.)

Nick. Local farm boy. Not one of the campers. (Singer.)

Mayor. Local Mayor Stevens. As the name suggests. (May be an adult or teacher).

Forest Ranger 1. (Could double with Bev.)

Chorus may double as :-