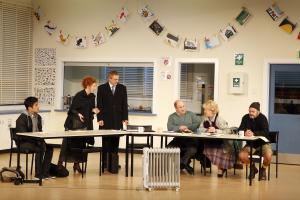 "A charming comedy...full of up to date gags and finger on the pulse problems." Sydney Morning Herald.

"There is something to offend just about everyone in Jonathan Biggins's deliciously light and perfectly pitched jokefest." The Australian.

"If you want social satire and huge laughs at the expense of, well, just about everyone in our sun drenched country, Australia Day is just the ticket." Herald Sun.

After several tours of duty as an Australia Day Ambassador in regional NSW Jonathan Biggins' initial scepticism about celebrating the national day melted like a Lamington in the mid-day sun.  It showed him the warmth, dedication and quiet patriotic pride of the organisers and the towns they served. The experience also whet his appetite to write a comedy that takes aim squarely at another hallowed institution – the committee.

45-plus, Mayor of Coriole Shire and preselection candidate for the Liberal Party. Chair of the Australia Day Organising Committee. Small business owner, Rotarian.

45-plus, Deputy Mayor of Coriole Shire and loyal Deputy Chair of the Committee.

35-plus, local Greens councillor, a relatively new arrival to the shire from the state capital. New to the committee.