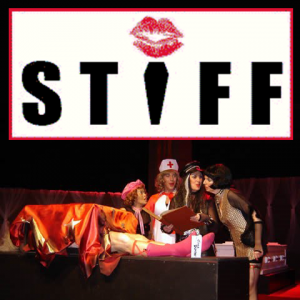 "Judging from the reaction of the sold-out opening night crowd, who laughed from the first line to the last, Phillips has nothing to fear." New Zealand Herald.

"It was a win-win situation all round – audiences loved it and Theatre Whakatane is thrilled with the overwhelming success of its recent production, Stiff.
Ticket sales to the show were beyond expectations, with more than 1600 seats booked over the week-long season that wrapped up last weekend." Whakatane newspaper.

Angel and her team of 'girls' (including an obsessive compulsive transvestite named Delilah) run an undercover massage parlour in the funeral home keeping up appearances despite the prying of a disgruntled former employee who felt he should have inherited the business.

Apart from the final scene, all the action takes place in a funeral parlour. There is a slightly raised landing upstage with a coffin in the centre on a table and the main entrance upstage left.

12.5% of Box Office. For New Zealand all inquiries to www.playmarket.org.nz