The New Boy Next Door 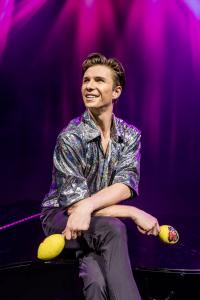 A new production of The Boy From Oz  will be staged by Platinum Entertainment in the Perth Crown Theatre from January 23.
Recent WAAPA graduate Ethan Jones is taking on the role of Peter Allen, the role which made Todd McKenney famous and scored Hugh Jackman a Tony.
The triple threat and pianist scored the role - just months after suffering the disappointment of losing work, when the Sydney production he was cast in (9 to 5) was cancelled.
Ethan Jones was cooling his heels in WA when the audition notice came through from Platinum Entertainment.
The Perth resident is looking forward to showing off his singing, dancing and acting skills to a new generation of Peter Allen admirers whilst admitting he has huge shoes to full. "This is a role of a lifetime," says Ethan. "I've dreamed about playing Peter Allen for years and am absolutely thrilled and perhaps a little daunted to be following in the footsteps of such luminaries of the stage."
Upon hearing the news, Todd McKenney, the original Boy from Oz sent the following message. "Congratulations Ethan, on landing one of the best roles in Australian musical theatre. You not only get to tell Peter’s amazing personal story through brilliant songs and amazing dance routines but you also get to talk directly to the audience - which provides some of the most moving moments.
“It makes me very proud to be passing on my Maracas to such a talented young man!”
The Boy from Oz, the story based on the life of Australia’s own singer/songwriter Peter Allen, will feature musical theatre performers including Lucy Williamson as Judy Garland, Elethea Sartorelli as Liza Minnelli, Casey Edwards as Marion Woolnough and Peter Cumins as Greg Connell.
The production will be directed and choreographed by Drew Anthony.
The shows catalogue of songs includes I Go to Rio; I Honestly Love You; Quiet Please, There’s A Lady On Stage; Tenterfield Saddler; We Don’t Cry out Loud and the song which has become our second anthem – I Still Call Australia Home.
The productions opens at the Crown Perth on January 23. Tickets on sale here.
Perusal scripts available through DSP here.