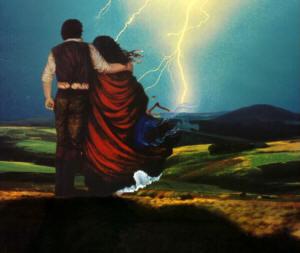 This has the drama, the love story and magnificent arias

The haunting image of Heathcliffe searching the moors for his beloved Cathy us one of the most enduringly passionate scenes in English literature.

Taylor's adaptation has been recognised by the Bronte Society as marking the first time that the true spirit of this masterpiece 'has been captured in  a musical.'

"This is what stage music should be - passionate, powerful, melodic . . . If you buy only one album this year, make it this one - Mike Gibb, Masquerade Magazine.

"The whole thing is tailor-made for the stage, where it is sure to go down a storm." Daily Examiner.

"Every number, whether vocal or instrumental, packs the kind of emotional punch that musical performers and audiences cry out for." Sarah Hopkins, Beneath the Mask" Summer 1994 issue.


Introduction by The Brontë Society

“Bernard J. Taylor’s work marks the first time that the true spirit and drama of Emily Brontë’s masterpiece has been captured in a musical.”

The Brontë sisters need no introduction: their lives and works are known not only to the English-speaking nations but to the world as a whole. Each year, over 200,000 visitors flock to , an upland village in West Yorkshire, England, to see for themselves the Brontës’ Parsonage home, lovingly cared for today by the Brontë Society. Although there have been many changes to the Yorkshire landscape familiar to the three sisters, much of the moorland remains the wild beautiful place they knew and loved, especially Emily to whom the lonely moors were a constant inspiration.

Emily’s almost mystical affinity with nature shines through her poetry and is very evident in her one and only novel, Wuthering Heights, one of the world’s acknowledged literary masterpieces. First published in 1847, has appeared in countless English editions, besides being translated into at least twenty-six languages, including Chinese, Icelandic, Japanese, Korean, Russian, Singhalese and Turkish. In , for example, Emily Brontë is revered, and her novel, despite many passages in dialect, is widely read both in translation and in the original.

is an intensely dramatic work, charged with emotion; it is not surprising that many dramatists, choreographers, lyricists and composers have been drawn to recreate it for stage and screen. There have been seven major films between 1920 and 1991 and in addition there has been a ballet (1982), and opera (1967) and numerous adaptations and plays, including several for television — and not forgetting Kate Bush’s song “” which topped the charts! Bernard J. Taylor’s work marks the first time that the true spirit and drama of Emily Brontë’s masterpiece has been captured in a musical.

Was there ever a real ? Many attempts have been made to identify particular places mentioned in the novel, but no one can ever be sure. Undoubtedly, Emily drew inspiration from many sources -- no one locality can wholly or perfectly mirror the world she portrayed, and in any case does it matter, since every devotee of Wuthering Heights has a personal vision generated by Emily Brontë’s genius.