Watson and the Dark Art of Harry Houdini 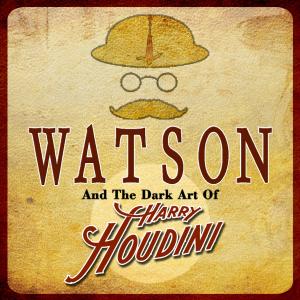 After a string of brutal murders, Watson and Holmes travel to New York on the trail of the killer. The mysterious Harry Houdini seems to know more than he’s telling, but is he friend or foe? Nothing is as it seems in this sequel to the award-winning Watson: The Last Great Tale of the Legendary Sherlock Holmes, as our heroes encounter murder, mystery, magic… and a heartbreak that is almost too much to bear. Don’t worry if your audience hasn’t seen the original Watson—this sequel will catch you up quickly and root you in its unique Holmesian timeline (10 years after Holmes and Watson’s last adventure). From award-winning writer and director, Jamie Robledo, another epic mystery.

Watson/Houdini begins in 1904 as our hero and narrator John Watson recalls a foreboding poem that came to him as if from nowhere. Egged on by Doctor Sigmund Freud, Watson begins to tell a dark and deadly tale living inside him struggling to get out. It would not begin with a bang, but with a scream! We are transported to a deadly attack by five thugs on a terrified woman. It would be this murder that propels the story in earnest.

We are transported to London where we are re-acquainted with Sherlock Holmes and his entire deductive prowess as he dispels the incorrect notions of scandal monger Langdale Pike. His older brother Mycroft takes him back to Baker Street to make up with Watson after a 10 year estrangement. Mycroft gives them a case to work together; a series of murders taking place in the same fashion, one week apart with Harry Houdini a person of interest. Another series of murders might be taking place in Coney Island New York and the only way to stop it is if the team of Holmes and Watson reunites. In flashback, Watson receives important, yet overbearing advice from Dr. Freud on how to move on from the death of his departed wife Mary who has been haunting him in dreams and in waking life, telling him “to let go.”

Holmes books passage aboard the RMS Cedric where the duo collides with Harry Houdini, who always stays one step ahead of them. It is aboard this ship that Watson meets Violet Hunter, a governess on her way to New York as well. Once arrived, Watson and Holmes track down Houdini once more (now seemingly in cahoots with Langdale Pike), but is given the slip. Watson’s relationship with Violet grows despite the ever increasing tensions of the case and the wrestling with the apparition of Mary. At a newly uncovered crime scene, fitting the pattern, Watson vows to press the issue and find out what’s up Houdini’s sleeve.

The act begins with one of Houdini’s greatest feats, the Upside Down straight jacket escape high above the stage. Watson and Holmes wait for him in his dressing room, questioning him with little success. Houdini worms his way out of the accusations, professing to be moving on to other cities in his tour.

We flashback yet again to Watson’s session with Freud as Watson confesses he may not be able to manage moving on his relationship with Violet. As return to the present Watson pushes himself away from Violet one last time. Unable to solve the mystery and finish his tale, Watson (on Freud’s advice) emulates Holmes’ deductive methods. He comes to the realizations the murders may have been carried out by Langdale Pike and adherents to a cult that mistook Houdini’s magic as true sorcery. Before he could tell Holmes that information, he is stabbed by Langdale Pike.

Harry Houdini / Herlihey – mid 30’s – mid 40’s – The world’s greatest magician. He is a dark unsettling presence. Must have a passable Irish brogue (plays a secondary role as Lt. Herlihey). Magic skills are not a requirement but a magician/escape artist is preferred in the role.

5 Stagehands – Ages 18 – 50. 2 Male and 3 female – All ethnicities. The ensemble will play a variety of roles including Bess Houdini and are the driving force of this physically demanding piece. Movement and dance training are a plus, but not required.