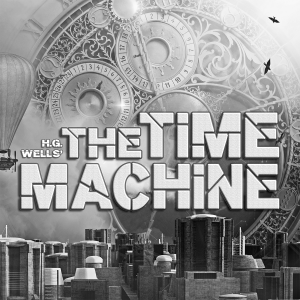 H.G. Wells’ classic tale about a Victorian inventor who builds a time machine and visits the far future is beautifully adapted into a ninety minute play.

The inventor soon discovers that progress doesn’t lead to a perfect world. Instead, he finds the future populated by two races. Above ground live the Eloi, a gentle, childish people whose lives appear to be free of struggle. However, below ground live the Morlocks, who, as the Time Traveler discovers, care for the Eloi like cattle to be preyed on for food.

When the Morlocks steal his time machine, the Time Traveler must fight not only to return to his own time, but to save the future.

The Time Machine, H. G. Wells’ ground-breaking first novel written in 1895, is a story that follows the adventures of a Victorian inventor who has created a machine he can use to travel through time.

After dinner with friends, the inventor argues that time travel is possible. To prove this idea is possible, he shows his guests a model of a Time Machine that disappears to travel into the future. He then surprises them further by showing them a full-scale Time Machine he can use to travel through time. The following week, the inventor shows up late for a dinner with his friends. His guests, surprised and concerned by his ragged appearance, ask him what has happened, so he tells them his story which the audience sees happening as he “tells” it.

The inventor had used his Time Machine to travel into the future. He began his journey by making three stops: in the 1950s, the 1960s, and in 2018. During each stop, he meets a young couple whom he talks with to find out about what their lives are like. Discouraged and disappointed to learn that advances in technology seem to separate people more than serve to bring them together, he decides to use his Time Machine to travel far, far into the future, where he stops in the year 802,701. He arrives next to a large sculpture of what appears to be a Sphinx.

There he meets the beautiful, but affectless, Eloi, who are like children. The Eloi do not work or make anything, and yet food appears for them, and they live in the ruins of the buildings of a past civilization. He wonders if the Eloi have machines that do their work for them and is disappointed that they do not use their freedom from want to build or create art. After eating with the Eloi, he falls asleep only to be awakened in the middle of the night when unknown raiders attack and kidnap some of the Eloi. The Time Traveler is astounded that the remaining Eloi don’t care what happened to their brethren. In the morning, he discovers that his Time Machine has been stolen. From tracks in the ground, it appears it was dragged inside the Sphinx, but he can find no way inside the base of the statue. He seeks help from the Eloi without success and is interrupted when an Eloi female is swept away in the river. None of the other Eloi react or do anything to save her, and the Time Traveler saves her from drowning.

He makes friends with the Eloi female, and they attempt to talk. He discovers her name is Weena. The Time Traveler discovers what appears to be wells through which air moves. Surmising the wells may lead him to an underground network he could follow to find his Time Machine, he lowers himself down the well, despite Weena’s pleading with him not to. At the bottom of the well, the Time Traveler discovers the well is really a ventilation shaft and machinery used to bring the air underground. He also discovers the remains of an Eloi on a table and realizes that the Morlocks take care of the Eloi so they can eat them. He is attacked by Morlocks but escapes by using the fire from matches to drive them away; the Morlocks are sensitive to light from living in the dark underground and are afraid of fire.

Afraid of a Morlock attack at night, the Time Traveler leaves with Weena in search of shelter, and they walk until they find an old museum. There, he looks for a weapon to use against the Morlocks and is upset to discover books and all mankind had built in ruins. He and Weena also discover the footprints of Morlocks, and he decides they will be safer in the woods. There he builds a fire to keep the Morlocks away, but in the night he falls asleep and the fire goes out. The Morlocks attack and kidnap Weena. He makes his way back to the Sphinx and is surprised to find a door open in the base. Entering, he finds his Time Machine, but it is a trap, and he is attacked by Morlocks. He escapes by climbing into his machine and travelling further into the future, when almost all life has died out. Disappointed by the end of time on earth, he returns to his own time.

No one believes the Time Traveler, even when he shows them a gift of flowers from Weena— flowers that do not exist on earth yet. All of his friends leave in troubled disbelief except his best friend, who stays behind while the Time Traveler prepares for another journey to get proof and save Weena. The Time Traveler goes into his lab and disappears. He never comes back, and his best friend is left to wonder, as is the audience, about what became of him.

1960s Couple – Couple dressed in a stereotypical manner of the mid-1960’s; hippie clothes and beads etc.

Present Day Couple – Couple dressed in a stereotypical manner of the present.

The Eloi – Small, childlike adults of the distant future; they speak an undecipherable language with lots of “L” and “O” sounds. They are completely self-absorbed and interested only in eating, sleeping, and laughing. Males and females dress in the same simple tunics. Their every need is provided for by the Morlocks, whom they fear as they fear the night.

Weena – Late teens/ early 20s; female Eloi rescued from drowning by the Time Traveller; she becomes attracted to and speaks with him.

The Morlocks – Mutated human creatures who live in darkness underground where they maintain giant machines that keep air flowing through their caverns and tunnels. They surface only at night to prey upon the Eloi; they are cannibals who fear light and fire. They feed and care for the Eloi as farmers raise livestock and communicate with each other with grunts and growls.

Place: various locations: the Time Traveller’s home outside of Washington, D.C. and future landscapes including the Eloi banquet hall, an ancient Museum, the lawn outside the Sphinx of the Morlocks, and inside the Sphinx and below ground.