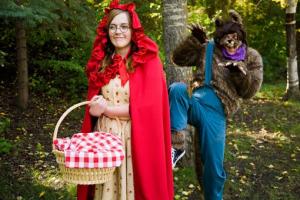 A traditional pantomime set in the Tyrolean mountains where Maria (who wears a red riding hood) meets her Prince, is bewitched by a Witch, attacked by a Wolf, but finally saved by Fairy Twinkle.

Interspersed throughout all of her adventures are the attempts by the dastardly Colonel Von Heinstien and his hapless henchpeople, Hans Knees and Bumpsy Daisy, to evict the gloriously gung-ho Gerty from her Inn because she hasn’t paid the rent for six years!