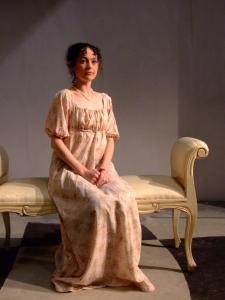 Persuasion is the bittersweet story of love that might have been. At the age of 19, Anne Elliot was persuaded to refuse an offer of marriage from a young naval officer. Their paths cross again eight years later, but now Anne is a faded spinster and her fatheris badly in debt, while Captain Wentworth has made his fortune in the war and is a much sort after matrimonial prize.

"Whalan … has successfully contained the action in two settings: the morning room of a country manor in the first half, and the drawing room of a town house in the second. The enlivening exchanges between the dozen characters who are seen on stage make offstage incidents and people come vividly to life, especially in Act I. Likewise, their comments on Anne, often made as if she is not in the room, and her wordless reactions to them, tell the audience a lot about her past and her hopes." ( Ken Longworth - Newcastle Herald)