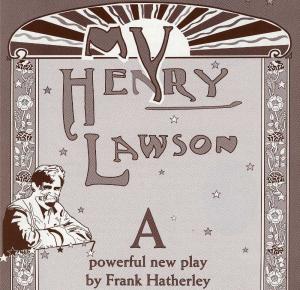 Covering the years 1896-1902, this revealing three-hander - by turn comic and searing - examines the traumatic marriage of Henry and Bertha Lawson, as well as confronting those two enduring icons of the Australian imagination, Lawson and 'Banjo' Paterson.

Middle-aged Bertha Lawson delivers a lecture to the NSW Poetry Society in 1923. She calls her censored version of history ‘My Henry Lawson’. But, as she speaks, we see the reality of her life with the famously unreliable poet.

In 1896 ‘Banjo’ is Lawson's solicitor as well as his rival 'bush poet'. Stunned to discover that the cash-strapped, heavy-drinking 30 year old Lawson has secretly married a 19 year old nurse, tries to advise his client.

The action follows Henry and Bertha to the goldfields of , and then to , literary heart of the Empire. When comes to in 1902 on assignment from the Sydney Morning Herald he finds the Lawsons in a desperate condition. Bertha's sanity is under attack. But when the Lawsons return to it is Henry who attempts suicide - from a cliff top.

The play includes excerpts from 8 of Lawson’s more self-revealing poems.

Stop Press: DSP has published My Henry Lawson in a compendium with Manly Mates and Open For Inspection. Order your copy now.