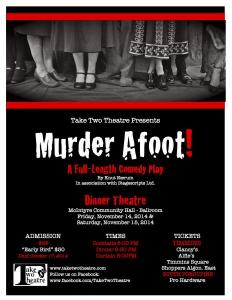 The action unfolds in the Drawing Room of wealthy factory owner Titus Platt’s rather stately home somewhere in 1930’s England.

Titus is murdered and Inspector Bullock of the Yard is sent for. When he starts to investigate there are many suspects: the son, Malcolm; his sister Penny; her fiancé Thomas; the maid, Livia; the house keeper, Miss Grimlish, and the mysterious new chauffeur, Dick Drake.

When a man staggers in, bound and gagged, and says that he too is Inspector Bullock, there’s quite some explaining to do!

Dark clouds are gathering over The Arches, the stately mansion of brash, larger-than-life shoe millionaire, Titus Platt. His peevish son Malcolm is hard up for money after living large and his ex-fiancée, the French night club singer Colette LaMarre, arrives bringing news that makes matters worse for him - she is with child, and the thought of having to tell his overbearing father fills him with dread.

When the notorious gentleman thief The Black Fox forcefully announces his intention to steal Platt's precious golden Etruscan dagger, Platt calls the police. Livia spills the beans to the rest of the staff that The Black Fox is on his way. Mistakenly, but understandably, all fear for their lives and, except for Livia, resign immediately. The chauffeur leaves too, and is replaced, perhaps rather too swiftly, by the intrepid Dick Drake.

Soon Inspector Bullock arrives to thwart The Fox's plans. During a thunderstorm in the night, Titus Platt is found murdered leaving a dying clue in the form of two chess pieces. The investigation comes to a head when a second Inspector Bullock turns up, bound and gagged, accusing the first of being a fraud. It appears that virtually everyone: Malcolm, Penny, Thomas, Livia, Miss Grimlish and even the new chauffeur, had a motive to kill Platt. False identities abound and, during the reading of Titus' will, some rather murky secrets of the past are revealed. Before dawn, another murder is committed and The Etruscan dagger disappears twice.

The action unfolds in the Drawing Room of Titus Platt’s rather stately home, The Arches -
somewhere in England. The drawing room has early twentieth century patterned wallpaper and
narrows towards the rear.
Along the walls, to one side: A doorway to the adjacent study and oil paintings in gilded frames.
Centrally placed: An early 20th century portrait of a mature lady of means, a golden Etruscan
dagger mounted on a shield of black velvet, and a small table with a crank-operated telephone.
Centre upstage, three steps lead up to a landing from which one may exit either way: one way,
towards the hall; the other, towards the Billiard Room and the Conservatory.
Behind the steps are French windows through which a terrace is visible. Beyond the terrace lies a
large garden with trees and hedges. Inside, at the side of the steps stands a pedestal with a Chinese
vase on it, together with an old wooden chair with upholstered seat and back and a mahogany
sideboard with a wide selection of spirits, bottles, carafes and glasses.
Centre downstage, there is a seating group consisting of a three-seat leather sofa, a leather armchair
and a low mahogany table. On the table there is a chessboard, an ashtray, a lighter and a fruit bowl
displaying bananas, apples, plums and oranges. There are Persian rugs on the floor.
Time
The action takes place from afternoon until sunrise. It is spring, 1936.

Thomas Tottering - the son-in-law to be, engaged to Penny

Colette LaMarre - a French songstress. (Must be able to sing unaccompanied)

Dick Drake - the chauffeur, speaks initially with a lower class accent, but is really Chief

Inspector Bullock 2 - Purports to be Another officer of the law, but is really The Black Fox,