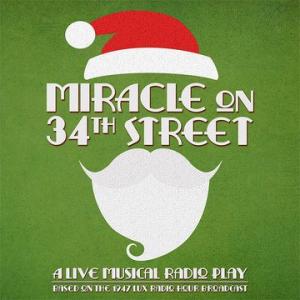 When a department store Santa claims he’s the real Kris Kringle, his case gets taken all the way to the Supreme Court and a little girl’s belief makes the difference in the ‘miracle.’  With live Foley effects and a score of holiday carols, Miracle on 34th Street is a beloved musical that will melt even the most cynical of hearts.

Listen to the musical tracks here at this link  - but return to the DSP page to order a perusal.

The “studio” audience filters in and our Announcer sets up the conceit of the evening (“KSDMT Theme/Introductions”). It’s 1947 and time for a star-studded telling of that classic tale, Miracle on 34th Street, presented by various sponsors (“Jingle”). Our story beings as Doris Walker frantically recruits a last minute replacement for a drunken Santa for Macy's Christmas parade (“Macy’s Parade Song”). The man proves ideal for the job and for good reason - he says his name is Kris Kringle and that he's the real Santa Claus.

Excusing herself from the parade, Doris finds her daughter, Susan, watching the parade in neighbor Fred Gailey’s apartment. Fred enjoys the spirit of the season, while Doris has taught her daughter not to believe in Santa Claus. Still, says Susan, this new Santa is the most realistic one yet.

At Macy’s department store (“Toy Department Song”), Kris is proving to be popular as well. He seems know just what kids would like to have and creates a bit of a sensation when he refers shoppers to other stores rather than Macy's. Fred brings Susan to Doris’ office by way of the toy department. He attempts to explain to Doris his intent but she insists he not interfere in how she raises her daughter (“A Little Make Believe”).

Irate, Doris dismisses Kris but upon Mr. Macy’s insistence, hires him back pending a psychological exam (“A Little Case Of Christmas”). The psychologist swears Kris is crazy, but a doctor friend at Kris’ retirement community suggests someone in the city rent him a room- that someone is Fred (“Jazzy, Sleepy And Final King Wenceslas”).  With Doris and Susan living just down the hall from them, Fred and Kris become good friends and all four begin to discover a lasting bond.

With competition fierce between Macy’s and Gimbels (“Macy’s Ad”, “Gimbels Ad”), Doris recommends a photo op with the two head honchos and the best department store Santa in ages (“Macy’s/Gimbels Mashup”). It’s a smashing success, and the waters appear to have calmed.

But when Kris has another run-in with the Department store's psychologist (“You Better Watch Out”), Kris is provoked into smacking some sense into him- with his silver-topped cane!

Fred rushes to Bellevue Hospital (“God Rest Ye Merry, Gents”) where Kris miserably awaits a court hearing. He convinces Kris not to give up hope, and that he’ll represent the would-be Santa as his attorney (“Santa, Don’t Let Us Down”).

A dismal dinner between Doris, Fred, and Susan ends in hope as Doris inadvertently gives Fred an idea of how to prove Kris is the real Santa Claus. Meanwhile, paperboys hawk the latest preposterous headlines (“Headline News”).

Once the hearing begins, Judge Harper realizes the “easy” case is anything but- and he adjourns until the following day.

At dinner (“Jazzy Halls”) Fred informs Doris that he quit his law firm. He’ll go into business for himself, championing the downtrodden. Doris finds it noble but foolish. The two can’t seem to click, and decide to take a break (“Melancholy Halls”).

The next day, Mr. Macy himself appears as a witness. After pressure from Mr. Mara, the Assistant District Attorney, Macy states his belief in Kris as the one true Santa Claus. Mara asks for evidence, and Fred asks for more time to solidify his case.

Missing her friend, Susan writes a letter to Kris (“I Believe In You”) and Doris advises her to address it to him at the courthouse. It’s addressed to Santa Claus, and Doris races down the hall to show Fred. The two reconcile and figure out a way to save Kris.

In court (“USPS Jingle”) Judge Harper asks Fred for his evidence and Fred provides it- thousands of letters in bags addressed to Santa Claus, all delivered to Kris at the courthouse. If the USPS recognizes Kris as the one true Santa, Judge Harper is not about to disagree. Case dismissed! Besides, it’s Christmas Eve (“Tidings Of Comfort And Joy”)!

At the retirement community, Macy and Gimbel share in a duet, while Kris attends to his friends. Doris believes in him, Fred is relieved, but Susan is unsure. She didn’t get the present for which she asked, the present of a home with a swing and a family to go in it. Kris reminds her to believe.

On the drive home, per Kris’ directions, Doris, Susan, and Fred come to a house matching Susan’s wish. It’s for sale, and even has a swing in the back. Next to the fireplace inside, a beautiful cane with a silver top (“Miracles”).

Our story concluded, the announcer thanks the radio stars and bids the audience a joyous holiday season (“Carol Palooza”)!

Additional Characters, played by the company:

Drunken Santa: Tight as a knot.