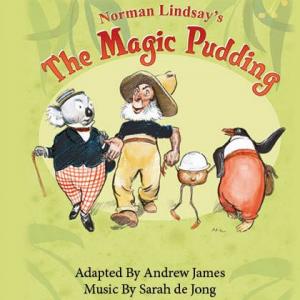 The Magic Pudding, written and illustrated by Norman Lindsay, was published in 1918 and quickly became one of Australia’s most loved children’s books. It was created by Lindsay in order to win a bet that children are more interested in food and fighting, than fairies. English novelist Philip Pullman described it as “the funniest children’s book ever written”.

Many stage adaptations over the years were puppet shows. In 2010 playwright Andrew James and award-winning composer Sarah de Jong were commissioned by the Marian Street Theatre for Young People, to create this new adaptation. This musical is the first version of The Magic Pudding specifically written to be performed by actors as opposed to puppets – except for one!

All characters are played by actors except Albert who is a puppet manipulated by an onstage puppeteer. The puppeteer might be dressed like a chef.

When actors are not needed as their core character, they can join in on songs, be villagers, townsfolk, musicians etc in any way that the director decides. Doubling of characters is possible with a smaller cast.

The script employs the use of shadow puppets in several scenes.

Everything in italics is sung.

16% of Box Office. Purchase of scripts. Rental of orchestrations.