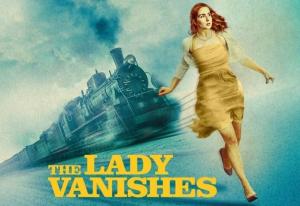 This new stage adaptation by Derek Webb is based on the original book, but aficionados of the classic 1938 Hitchcock film will find this play version just as gripping, with a good dose of humour.  By going back to the original novel, the play tries as much as possible to capture the 1930s feel of the original. Much of the comedy will be derived from playing up to the attitude of those mid-war years in terms of character and accent.

On a train headed for England is a mixed group of travellers, one of which, a wealthy young woman – Iris Carr – befriends elderly Miss Froy. But then, after lunch, Iris wakes to find the old woman has disappeared. Mysteriously, the other passengers deny Miss Froy ever existed.  What secrets are the sinister Doctor, the fierce Baroness, the so-called honeymoon couple, the vicar and his wife and the garrulous spinster twins hiding?

The classic 1938 Hitchcock film ‘The Lady Vanishes’ was based on a novel called ‘The Wheel Spins’ by Ethel Lina White. It took various liberties with the plot, including introducing a propaganda element involving Nazis. This stage adaptation goes back to the original novel and tries as much as possible to capture the 1930s feel of the original. Much of the comedy will be derived from playing up to the attitude of those mid-war years in terms of character and accent.

The play has been written so that there is a continuous sense of action, moving seamlessly from one scene to the next as far as possible. The various different ‘sets’ are all on stage throughout and lit as appropriate.

The story:  Iris Carr is a wealthy socialite and we first meet her as she faints with sunstroke waiting for a train to take her back to the UK after holidaying in Eastern Europe. Once on the train she is in a compartment with a ‘honeymoon couple’, an austere Baroness, a formidable looking ‘Doctor’, and an elderly lady with an eclectic dress sense – Miss Froy.

She befriends Miss Froy who tells Iris that she was a governess for an important family in Moldavia, but is now between jobs and is journeying back to England to spend some time with her parents.

Shortly after, Iris falls asleep and, when she wakes, is surprised to find that Miss Froy is no longer there. But, when Iris asks the others where Miss Froy has gone, she is astonished that they deny she was ever there!  Unable to comprehend this, she goes out in search of Miss Froy and meets up with Max Hare and his friend a Professor. Together they agree to help Iris find Miss Froy but soon begin to doubt her word as they are met with denial from everyone they talk to.

Then the Doctor announces that her has found Miss Froy – she was in the next compartment all the time.  Delighted Iris rushes to the compartment to discover it’s an entirely different woman altogether: Frau Kummer.  A woman dressed as Miss Froy. ‘That's not Miss Froy!’ declares Iris at the end of Act 1.

In Act 2, Iris enlists the help of the Reverend Barnes’ wife who remembers seeing Miss Froy, but she – to Iris’ dismay – identifies Frau Kummer as Miss Froy.  Max, it seems, is Iris' only ally. He encourages her to try to remember any clues, and Iris remembers a story Miss Froy told her about her previous employer, who wasaccused of corruption by the political opposition.

Max produces has a local newspaper he found in the restaurant car that has an article about the murder of a prominent newspaper editor opposed to the ruling party. Miss Froy’s employer was accused of the crime, but released because he had an alibi – being at the time in his hunting lodge.  Max suggests that perhaps Miss Froy has been kidnapped because she is a witness that her ex-employer’s alibi is worthless, but dismisses the idea as pure fantasy.  He encourages Iris to forget all about ‘Miss Froy’.

By now Iris is beginning to doubt herself and fears she may be going mad.  But then she discovers Miss Froy has written her name in the dirt on the compartment window where she was sitting. Meanwhile the Doctor has convinced the Professor and others that Iris should be taken to one of his care homes in Trieste when the train arrives, for her own safety.

The Doctor has another patient, wrapped in bandages in the next compartment and Iris, convinced that it is in fact Miss Froy, threatens to go to the British embassy in Trieste.  The doctor suggests to the professor that she be given a sedative by force. He convinces Max of her desperate need for sleep; to that end, Max brings her soup laced with a sedative, which she drinks and falls asleep. But when she awakes as they approach Trieste, in a half-daze she staggers into the next compartment and tears at the bandages of the patient, to discover it is indeed Miss Froy!