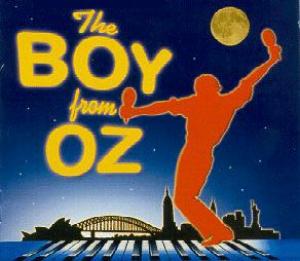 “My songs are my biography”…Peter Allen

The Boy From Oz is the most successful Australian musical ever and the first to make it to Broadway. It is a musical biography/tribute to the late great Peter Allen.

Peter Allen was born in the outback Australian town of Tenterfield in 1944. He made his entertainment debut at the age of 5 impersonating Al Jolson. As a teenager he became a pop star and then toured Asia. There he met Judy Garland who took him to Londonwhere he met and become engaged to her daughter Liza Minnelli. In the US Peter enjoyed the highs of success by winning an Oscar, selling out performances in Radio City Music Hall, and receiving adulation when he returned to Australia. There were also plenty of lows … breaking up with his wife, staging a Broadway flop, the death of his partner and his own battle with illness. Peter Allen had an extraordinary life which producer Ben Gannon realized had the potential to become a magnificent musical and with Robert Fox they turned it into the smash hit it became.

The Boy From Oz is a class above all other ‘jukebox’ musical. The late Nick Enright. skillfully weaved his plot around the life and complexities of Peter Allen. The songs and lyrics sit easily with the rhythm of the piece and with the characters as they enter and re-enter his life, be they dead or alive. It leaps, as does Peter himself, from past to present and back to past all within the familiar context of one of his energy packed concerts.

THE BOY FROM OZ HALL OF FAME. BELOW ARE SOME OF THE BOYS WHO HAVE PLAYED PETER ALLEN.

Peter Allen……..Must be able to dance and sing and do anything.

Marion Woolnough….Salt of the earth, mid 50’s and up.

Brian Henderson…Young TV host. ( Not in US edition )

Josie…Manager of the New England Hotel. ( Not in US Edition )

Chris Bell…Young song writer and member of the Allen Brothers.