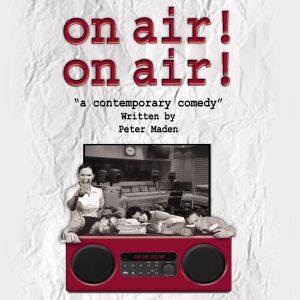 “On Air ! On Air !”  takes you on a lightning paced, funny and at times, sad journey behind the glitter of advertising, exposing a world of high pressure, memorable characters and ethics which change conveniently in their desire to succeed.

In the hectic copy writing department of a busy Metropolitan FM radio station hard nosed salesperson Kate, calls for an ad for a dodgy jewellry retailer to be written, produced and on-air immediately.

Despite the efforts of the creative team,  the project is thwarted by one disaster after another. Along the way, the morals and ethics of the characters are corrupted by a combination of money, favours, fear and power.

Where does corruption really begin?  What compromises to our personal integrity do we have to make to be successful and what are the consequences?

This witty, contemporary play invites you into another world that really exists.

(Aaron/Wayne/Kelvin can all be played by the same person)