Murder on the Menu 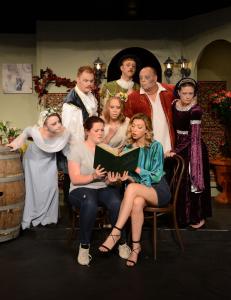 Sophia has been conned into buying a derelict theatre. Now with crushing bank loan payments to make and no money, the jobless Sophia decides to defy the odds and dig her way out of her financial mess by reopening the theatre as a cafe. Her already dire situation worsens when she soon discovers that the theatre is inhabited by the pompous ghosts of dead Shakespearean characters who are hell-bent on keeping their home just as it is. By chance, Sophia discovers that the only way to get rid of the ghosts is to murder them as they were killed in their original plays. At Sophia’s cafe, Murder is now on the menu.

"Williamson works in several classic lines in ways Shakespeare never thought of – such as Romeo's "What light through yonder window breaks?" when he catches a rear view of Sophia bending over and "O that I were a glove upon that cheek" when she happens to have her hand on her posterior – that had the audience in stitches.

And, of course, you can count on a predictable gag like being "stabbed through the arras" to be in there somewhere. An alternative title for this enjoyable romp could almost be "Carry On Shakespeare", though without the cringe-worthy political incorrectness that was the hallmark of the movies."

An ancient abandoned Shakespearean stage set is strewn across the stage covered in dust sheets. Multiple entrances/exits are required.

The play is set in an abandoned theatre over the best part of a week.

SOPHIA: A young working-age woman lacking confidence and self-esteem. She has recently lost her job.

ROMEO: The ghost of Shakespeare's famous character. He can’t help but fall in love with every woman he meets. What he lacks in smarts he makes up for in self-love.

OPHELIA: Desperate for Hamlet’s love and attention, she has become bitter and grief-stricken. A ghost.

HAMLET: Morose and preoccupied with his personal issues, he only has time for his one confidant... the skull of Yorick. A ghost.

MACBETH: A Scotsman, his accent is so thick there are times he is impossible to understand. A big brawler of a man. Obsessed with haggis. A ghost.

LADY MACBETH: Very Scottish… whatever that means. Her accent is thick but not as thick as her husband. Devious, nasty and a bit precious. A ghost.