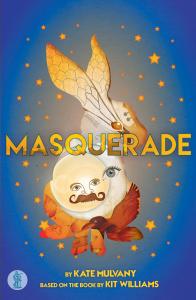 A gorgeous musical adventure based on a children's classic.

In a wondrous world of riddles and hidden treasure, bumbling Jack Hare is on a race against time to deliver a message of love from the Moon to the Sun. Far, far away in a world just like ours, a mother cheers her son Joe with the tale of Jack Hare’s adventure. But when Jack’s mission goes topsy-turvy, Joe and his mum must come to the rescue, and the line between the two worlds becomes blurred forever.

Bringing to life Kit Williams’ iconic picture book, Masquerade stars a talking fish, a tone-deaf barbershop quartet, a gassy pig, a precious jewel and a few mere mortals. It’s a magical adventure that is, at its heart, about the love between a parent and a child.

"With Kit Williams himself as mentor and friend, she has interwoven her own story and the magic that is Masquerade into a beautiful and moving piece of theatre, which, like the book, has universal appeal." Stage Whispers.

"Music by Mikelangelo and the Black Sea Gentlemen is wonderful, and provides a perfectly eclectic underscore of gypsy-classical-rock." Theatre People.

The man who plays the music that makes the world go round - the keeper of time.

The practical man - an opportunist.

Writers Note. In this play any one actor can play several; different characters . Ideally the cast size should be no less than six performers who double through out the show.