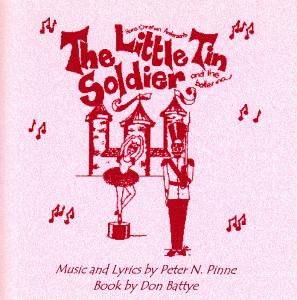 “Tin Soldier shines as a musical.” (The Age)

Han Christian Anderson’s tale of The Little Tin Soldier and the Ballerina, has never been more enchantingly portrayed as in this wonderful soft-rock version.

Set in Toyland, a tin soldier is tossed out of a window by a wicked Goblin. He goes down to the sea in a paper boat, sinks to the bottom of the ocean, and is swallowed by a fish before he ends up back with his friends in Toyland.

As the critics claimed, “it’s a glorious fantasy, loaded with plenty of ‘Nutcracker’ style entertainment, color and movement.” Jim Murphy in his liner notes for All The Colors of the Rainbow CD called the song “Lullaby” “limpidly lovely.”

A young boy, Mark, is given a set of tin soldiers for his birthday by the family’s cook. One of the soldier’s doesn’t have a rifle so Cook uses a matchstick to replace it.

In the nursery Toyland, the set of tin soldiers meet the other inhabitants, a bear and a ballerina. The little Tin Soldier is immediately attracted to the Ballerina, but the evil Green Goblin also has designs on her as well.

Back in the kitchen Mark puts the tin soldiers away for the night and Cook sings him to sleep. When he’s asleep she notices he has left the Little Tin Soldier on the floor and Cook places it on the windowsill.

Later during a storm the Tin Soldier falls from the window into the gutter and is swept down the drain in a paper boat. Before he reaches the sea he meets a customs official, a water rat, who questions him before letting him continue.

Under the water in the Kingdom of Neptune, the King and Queen are preparing for their annual Coral festival when they hear the news that a tin soldier has invaded their territory. They are all horrified. He must be eaten at once.

The Tin Soldier and his paper boat are swallowed by a big fish. Back in Toyland everyone is missing the Tin Soldier, especially the Ballerina. The Green Goblin, determined to marry her, is happy he is the only contender for her hand.

The King, Queen and the Coral Society are also eaten by the big fish and are shocked to discover they share his insides with the Tin Soldier. The queen leads her subjects in a tap dance which tickles the inside of the fish to make him flush them out.

Back in Toyland the Green Goblin prepares to marry the Ballerina. In the kitchen young Mark arrives home with a fish for dinner. When cook opens it she discovers the missing Toy Soldier inside. The Tin Soldier returns to Toyland in time to stop the Green Goblin from marrying the Ballerina and marry her himself.

The Little Tin Soldier
20-25 A military man who wears his heart on his sleeve. Must be able to sing.

Ballerina
18-20 A pretty young girl whose passion is to dance.

Green Goblin
30-40 An evil, ugly man who tries to get what he wants by foul means.

Queen Neptune
30-40 She calls the shots under the water. Soprano range.

King Neptune
30-40 Happy to be under his wife’s thumb.

From a paper boat.

No one's as handsome as me.