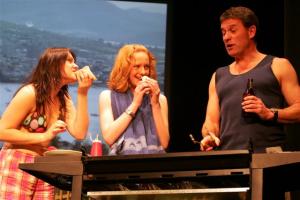 Barbecue is a play about many things including the Australian cultural ritual, the “barby”. It is intended to be performed in a space where audience members can feel they are an integral part of the event.

Sausages (or other inexpensive goodies) are cooked on a gas barbecue throughout the play. These are intended for audience and performer consumption, probably served with such “up-market” side-dishes as bread and tomato sauce.

As the sausages are cooked, they can be served to the audience by cast members not involved in dialogue but who are specifically onstage enjoying the celebration or by two non-performing characters, Denzil and Denise.

Denzil and Denise are referred to throughout the play. They may be front-of-house staff or crew members. They should be identified with at least a name tag but preferably will wear aprons with the character names on them.

From a production point of view, the cooking of sausages necessitates two things ~ the inclusion of the cost of a couple of kilos of sausages, bread and sauce for each performance in the production budget and a careful check with the theatre administration on the effect a real barbecue may have on the theatre smoke and fire alarms.

Outdoor performances in fine weather would overcome the latter consideration but then producers must be aware of regional fire bans.

Other than these couple of concerns, the play offers a good fun night for audience and cast alike.

Connie Cooper Col’s wife. Late thirties. Also good, honest battler not at all phased by the family’s recent good luck. Col and Connie are model parents of their two children ...

Kylie Cooper ... about twenty, a Uni student who is fairly street-wise from growing up in the working class suburb of Bestwood, and

Krystal Cooper mid-teens, still at high school, probably year eleven or twelve. Both Kylie and Krystal are well adjusted, loving kids who answer to the pet names their parents have bestowed upon them of Possum and Bubby respectively.

Leroy Young A visitor from America who is on a mission. Leroy is in his early to mid-twenties and ready to break out of the mould cast for him by his parents.

Jonathan Leroy’s friend and “business” partner. Slightly younger than Leroy, a little more naive but, like Leroy, ready to question the life his parents have mapped out for him.

Len McKenzie Apparently a successful businessman in the community of Grand Bay. Len is probably late fifties and full of his own importance. He is a councillor, President of the elite golf club in the district and a server at the local Anglican church.

Judith McKenzie Len’s wife. From a moneyed background, Judith is the embodiment of all the worst things people think about the social-climbing set. She is loud, self-centre, opinionated and shallow. The character is early to mid fifties but as Judith would fit into the “mutton dressed as lamb” category, she could be played by a woman of any mature age. Judith has red hair.

Marion McKenzie Len and Judith’s daughter. Stereotypical “spoilt rich bitch” who has had it all and done it all and continues to do it all, in contrast to the relative innocence of the Cooper girls. Marion is probably early twenties but emotionally “going on sixty”!

Denzil and Denise Non-speaking “guests” at the barbecue whose primary role is to oversee the cooking and delivery of sausages to cast and audience members.